Marine and coastal vegetated habitats may act as microplastic barriers

Microplastic particles that were trapped on the surface of the seagrass meadow. 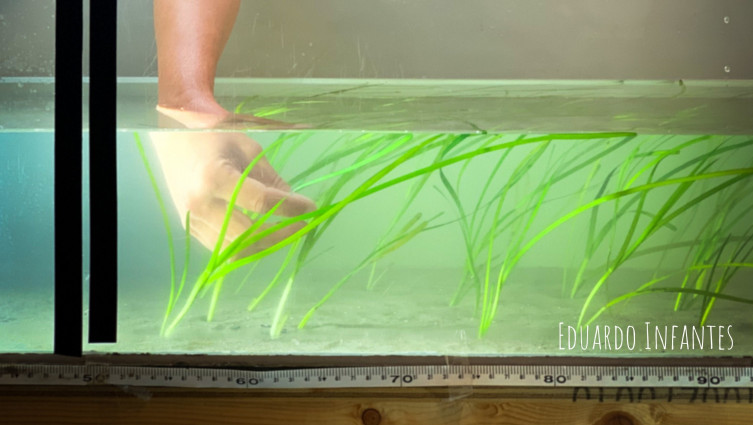 Seagrass under controlled bio-physical conditions in a hydraulic flume.
Prev Play Pause Next

Microplastics are probably the most abundant plastic debris in the oceans. Marine and coastal vegetated ecosystems such as seagrass meadows, macroalgae beds, saltmarshes or mangroves are well-known for their ability to retain suspended particles, acting as a biofilter for sediment particles. In this new study, researchers demonstrate that marine and coastal vegetated ecosystems can act as potential barriers for microplastics under certain conditions.

In this article recently published in the international journal "Environmental Pollution", researchers investigated the probability of these coastal marine habitats retaining microplastics under controlled bio-physical conditions in a hydraulic flume. The researcher Carmen Santos, from the Centre of Marine Sciences (CCMAR) in the Algarve, collaborated with Eduardo Infantes (University of Gothenburg and Norwegian Institute for Water Research, NIVA) and Anna-Sara Krång (IVL Swedish Environmental Research Institute) in a study conducted at the Kristineberg Marine Research Station, in Sweden, in which they demonstrate that marine and coastal vegetated ecosystems can act as potential barriers for microplastics under certain conditions.

The species of seagrass Zostera marina was used as model vegetation and industrial pellets of different types as if they were particles of microplastics. "Our goal was to identify which type of microplastics are most likely to be trapped in seagrass meadows, which seagrass density is more likely to retain microplastics, and under which hydrodynamical conditions (flow velocity) the trapping is more likely to occur”, clarifies Eduardo Infantes of the University of Gothenburg.

The results showed that "these ecosystems can retain particles and that this capacity of retention is higher when the canopies are very dense and the velocity of the currents is low, yet it varies with the type of microplastic polymer”, explains Carmen Santos from CCMAR. The authors concluded that these ecosystems should be considered priority habitats in the assessment of microplastic exposure and impact on coastal areas since they may accumulate a high concentration of microplastic particles and can help decrease the concentration of microplastics in water, but on the other hand, this accumulation can have negative impacts on ecosystem fauna.

This study adds to the CCMAR efforts to understand the dynamics of plastic pollution in coastal vegetated ecosystems. In a previous study, a group of CCMAR researchers found that the vegetated habitats in the Ria Formosa lagoon accumulate in a variable degree macro and microplastics. These two studies are connected, as they were conducted either in laboratory experiments under controlled conditions and in nature, using natural ecosystems to observe the concentrations of microplastics.