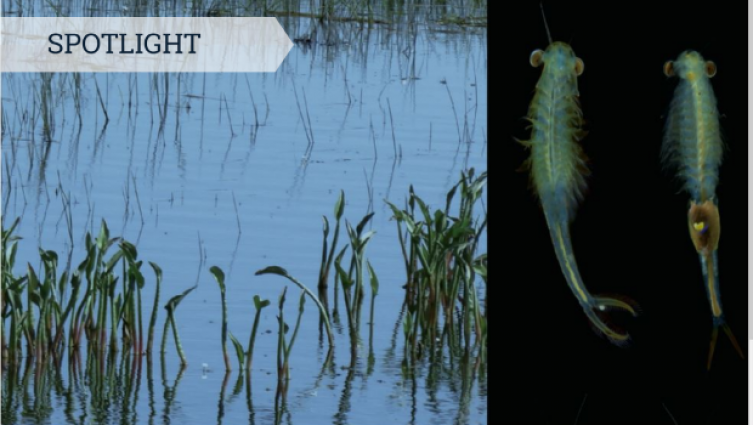 Fairy shrimps and their unique characteristics
Have you ever heard about temporary ponds? They are unique freshwater wetland habitats exposed to extreme environmental conditions where flooding periods alternates with periods of drought. Due to their nature, these habitats host species that have developed specific adaptations to cope with these conditions.

Fairy shrimps (Crustacea: Branchiopoda: Anostraca) are characteristic inhabitants of these unique environments, which produce desiccation-resistant resting eggs (cysts), where the embrionary developing rests in suspension (diapause) during dry periods until the next flooding period. During flooding periods, only a fraction of the cysts hatch, originating the active population, while another part rest dormant in the soil, remaining viable for decades. This strategy of asynchronous hatching (space between the hatching of the first and last egg) may assure the long-term survival of populations.

In a changing and unpredictable environment, the egg bank becomes the genetic reservoir that, due to this reproductive strategy, can produce genetically distinct active populations from different reproductive events separated in time, a phenomenon called temporal dispersal. However, this strategy is not only affected by resting egg production, hatching and loss, but also by the spatial dispersal of individuals due to a series of different vectors such as wind, water, amphibians, water birds, etc.

Distribution of fairy shrimp species for analysis
Although some fairy shrimp species are widely distributed, more than 50% of the species are only known from ten or fewer localities, indicating that dispersal is quite variable among species. Therefore, our researchers in collaboration with researchers from the Institute of Aquatic Ecology, MARE/Laboratorio Marítimo da Guia and Centro de Ciências e Tecnologias da Água, decided to investigate the relationship between the different geographic distributions and patterns of genetic structure between two species of this shrimp in temporary ponds.

Between 2005 and 2018, researchers collected samples of the species Branchipus cortesi and Tanymastix stagnalis from southern Portugal temporary ponds, with different geographic distributions but similar life traits. Branchipus cortesi is an Iberian endemic species and T. stagnalis has a wider distribution ranging from Scandinavia, Ireland, south-western Russia to southern Europe and North Africa (Algeria). Regarding T. stagnalis, five other locations from Spain and France were included.

Two fairy shrimp species in temporary ponds with distinct genetic patterns
The recently published study and journal cover of Freshwater Biology revealed the existence of contrasting genetic patterns between the two species of fairy shrimp in Iberian temporary ponds. The molecular analysis of the reconstructed geographical distribution between these species indicates the existence of deeply divergent clades with clear phylogeographic patterns in T. stagnalis, while B. cortesi shows shallower divergences with a less clear geographical correspondence.

This study revealed that T. stagnalis dates back to the Oligocene period while B. cortesi is more recent at about 12.4 million years ago. The severe cooling and aridification observed at the end of the Oligocene in the Iberian Peninsula triggered the divergence of T. stagnalis originating two clades (group of organisms originating from a single common ancestor) in populations inhabiting the leading edges of the Portuguese southern distribution. However, this genetic imprint is not observed in the Portuguese B. cortesi populations, given their more recent origin during the Miocene.