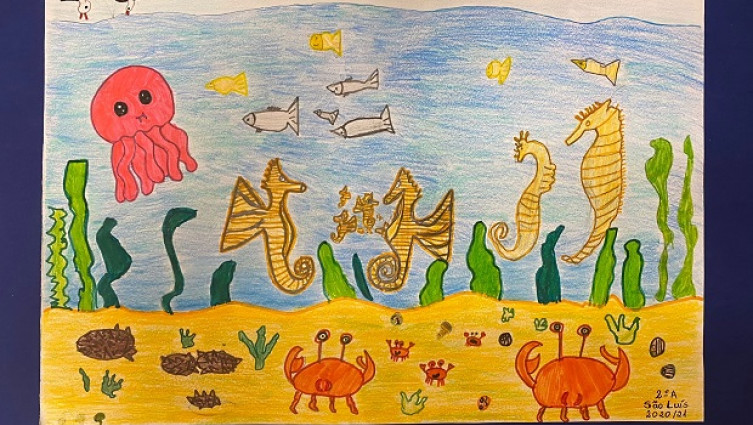 When they heard that the seahorses in Ria Formosa are disappearing, the students of class SL_2A, from school Eb1 São Luís became worried and decided to take some action. Under the guidance of their teacher Anabela Pimenta, these 2nd-graders developed a marine conservation awareness campaign!

The campaign started with some research: the students gathered information about seahorses and made presentations to share with their classmates. With what they learned about seahorses, they created a children's game. But they wanted to go even further and contribute to the conservation of this very special species...

Thus, our researchers Rute Martins and Jorge Palma were invited to participate in the project of these students. In this collaboration, Rute and Jorge visited these students at school and not only explained the situation of the seahorses in Ria Formosa but also discussed activities that each person can do to protect these fish that make Ria Formosa their refuge.

"If they realized how special seahorses are to all of us, would they stop fishing them?", students from SL_2A class.

Motivated to do some marine conservation, the students wrote a letter to the Mayor of Faro Rogério Bacalhau, in which they expressed their concerns and suggested some ideas that could help to protect the seahorses of the Ria Formosa. The appeal of these children did not go unnoticed to the Mayor, who met with the children to talk about this problem and discuss the proposals they presented.

It was a pleasure to collaborate with these kids, and we hope that their proposals will contribute to the conservation of the seahorse. Take a look at their wonderful campaign, leave a comment, and share it with your friends! Help these students to spread their conservation message.