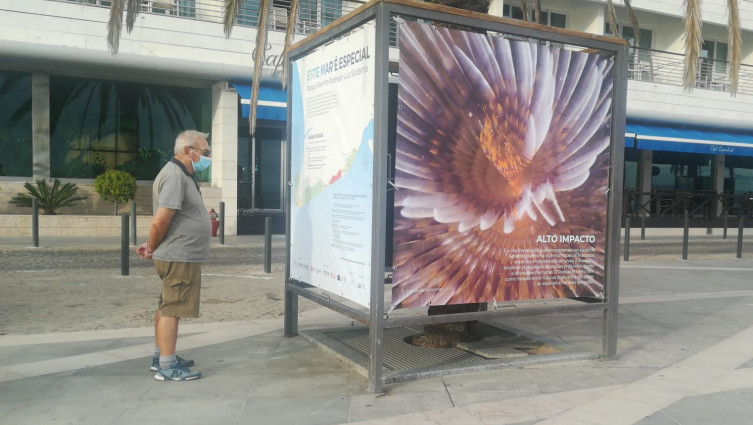 “Este Mar é Especial" ("This Sea is Special”) is a photographic exhibition that focuses on the unique natural values ​​of the Arrábida-Espichel coast and the role that the Professor Luiz Saldanha Marine Park plays for its conservation. Located in Seseimbra's waterfront, the exhibition is open-air and can be visited until October 31, 2020.

Professor Luiz Saldanha Marine Park, created in 1998, stretches along 38 km of rocky coast between the beaches of Figueirinha, at the exit of the Sado estuary, and Foz beach, north of Cabo Espichel. It is a very special coastal area given its unique biodiversity - in its waters, more than 1770 marine species have already been observed, a value that is much higher than that observed in the adjacent coastal areas. The exhibition visually explores what makes this sea so special and the different initiatives and actions that the Parque Marinho promotes to maintain and recover its marine ecosystems.

The exhibition is part of the Programa BIOMARES, a set of initiatives that the Centro de Ciências do Mar do Algarve (CCMAR)(CCMAR) and the Instituto Universitário de Ciências Psicológicas, Sociais e da Vida (ISPA) has been implementing on the coast of Arrábida-Espichel since 2007 to ensure the Marine Park's monitorization, the characterization of its unique ecosystems, habitats recovery and the environmental awareness of visitors and local communities.

“It is very important that everyone who enjoys the special sea off the coast of Arrábida-Espichel has an idea of ​​the richness of these waters, but also of the threats they face and the role of the Marine Park to minimize them. Only with the collaboration of everyone will we be able to maintain this natural treasure for the next generations ”, says Ester Serrão, a researcher at CCMAR and one of the coordinators of Programa BIOMARES.

The exhibition was funded by SECIL and POSEUR (Programa Operacional Sustentabilidade e Eficiência no Uso de Recursos) through the Inforbiomares project, which also includes Instituto da Conservação da Natureza e das Florestas - ICNF (entity that manages the Marine Park) and the Liga para a Protecção da Natureza (LPN) as partners. Hosted by the Câmara Municipal de Sesimbra, the exhibition was installed on the waterfront of this village where it can be visited for free and safely in the current COVID-19 context.